Posted at 05:22h in Culture by vinyloftheday

“I like to grab the parts you don’t expect me to grab,” DJ Premier told Noisey earlier this week, talking about his sampling style. “You grab an ass, I grab a pinky finger—you know what I’m saying?”

Calling the producer a pioneer has become something of a cliche, but it’s an epithet that fits. He’s been behind the boards on everything from Illmatic to Ready To Die to Reasonable Doubt— a Houston-area native, Premier ended up helping define the sound of Brooklyn hip-hop. When people like Joey Bada$$, whose PRhyme collaboration “Golden Era” Noisey is premiering below, talk about hip-hop’s 90s golden era, they are literally talking about DJ Premier.

Even before that wave of seminal records, though, he was braving new sonic territory as one of the first hip-hop producers to sample jazz, something that helped draw a clear spiritual line between different eras of black music. 1989’s “Manifest,” his very first single as one half of Gang Starr, used the groove from Charlie Parker and Miles Davis’s famous rendition of “A Night In Tunisia,” and it caught the ear of Spike Lee, who tapped the duo for the soundtrack to Mo’ Better Blues (1990). They contributed a modified version of their No More Mr. Nice Guy track“Jazz Thing”—in Premier’s words, “Spike said that we didn’t cover a lot of jazz musicians that should have been mentioned [in the original]”—met the project’s musical director Branford Marsalis, and the rest, according to the producer, was history. 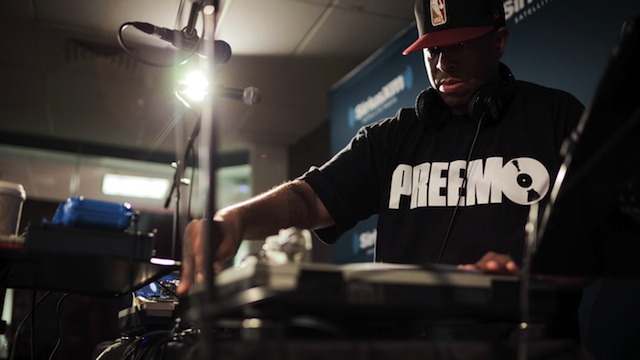 What followed was a series of classic records and crossover projects that exploited Premier’s deep knowledge of the genre without sounding anything like a Ken Burns documentary. He produced Marsalis’s crossover Buckshot Lefonque album (named for one of Cannonball Adderley’s aliases) and contributed to Guru’s Jazzmatazz series, drawing from the same inspirations for his more mainstream projects. “N.Y. State of Mind,” for example, was built on a Donald Byrd sample; “Ten Crack Commandments” on Les McCann.

It was groundbreaking work. A Tribe Called Quest and De La Soul were exploring similar sources, but they were doing so as a part of active resistance to more street-centric rap rather than as an embrace of it. For Premier, though, the tie between the genres is self-evident. “Jazz came from the streets, hip-hop came from the streets,” he says. “It’s just a different language. It’s all borne out of hard times, struggle, and the fight to have equality and things be better. To talk about the fucked up things that go on in our community, when it comes to us being minorities. We’ve contributed so much to this planet to make it dope.”

As one of hip-hop’s, uh, premier jazz historians, DJ Premier was glad to share his picks for the jazz albums every hip-hop fan should know:

“My mom had it, and she used to play it in the house all the time. She’s is an art teacher, she painted a lot and is really into African art—my parents had African statues all over our house in Texas. The album art for Bitches Brew, with the dark-skinned black person—we come in all different shades, but darker-skinned black is not always promoted as much as lighter-skinned black. She painted everything, but she was really into African-looking [iconography], and that cover embodies that. That grabbed my attention. And then when you hear the music, it’s what the cover looks like.”

“I’m a bass player and I’m a drummer—I’m a big fan of bass players. I love Stanley Clarke (I likeRocks, Pebbles and Sand. One of my favorite albums. And School Days–heavy on School Days. I could listen to that album all day), I love Jaco Pastorius, who was in the group. The record that grabbed me was ‘Teen Town,’ so once I started getting into that I listened to all the Weather Report albums, from Black Market to Mysterious Traveler. I got really into them, and then Jaco started doing solo stuff—I was into him and pianist Joe Zawinul.”

THE CRUSADERS – THOSE SOUTHERN KNIGHTS (1976)

“‘Keep That Same Old Feeling’ was a very, very popular song—it’s one of the hardest to learn how to play on bass. It was a record that made me want to master the way that the bass player plays. That’s why I was into that song. And it’s all Crusaders albums—Southern Comfort, Chain Reaction, Second Crusade, definitely Street Life. But Those Southern Knights, just because of that one song ‘Keep That Same Old Feeling,’ the time signatures, the way they play it—it very heavily influenced how I lay basslines now, how I cover a sample and play on top of it. I won’t sample it, but it influences how I how produce and how I play.”

“That song, ‘Walk Tall,’ with Jesse Jackson speaking at the beginning of the song— we thought that was a big deal. Like, wow, you got Jesse Jackson on there. Actually, A Tribe Called Questused it on—I’m not going to even say, they may not have cleared that.”

“I’ve been listening to Herbie Hancock forever. He’s gone through so many transitions, even before bringing hip-hop to the forefront with ‘Rockit’ and everything. We were already listening toHead Hunters, and Thrust, and Manchild. Future Shock had ‘Rockit,’ and that was a big step in the direction of bands paying homage to hip-hop, even with the video. Even doing it live on the Grammys? All his stuff—Secrets… he’s gone in so many good directions. He followed through all different genres and still remains himself. And wasn’t afraid to go there, you know?”

“He taught me a lot when we worked together on the Buckshot LeFonque project—about his views on how he plays. Whenever we’d argue over hip-hop, he never liked the lyrics. He didn’t care about the lyrics, he was about the track. We always had that debate, but one thing I like about him is his honesty, and his respect for me and what I did. He saw how I manipulated the music. He’s really the reason, along with Spike Lee, why we got signed to a major with Gang Starr. I owe a lot to him. A lot.

Random Abstract came out in ’87—when Guru and I met Branford, Random Abstract was his most current album. I got into the artwork, because it made me think of my mom—all the abstract stuff she had in the house, and all the people in the neighborhood who had my mom’s work in their houses.”

PRhyme, DJ Premier’s collaboration with Royce da 5’9”, are re-releasing a deluxe edition of their self-titled debut on Friday. Below, listen to “Golden Era,” the latest new track off the project, which features Joey Bada$$. Premier has worked with young rapper before (one of their collaborations, “Paper Trail$,” appears on his debut album), who he characterizes as “really focused—full of the right energy to be in this industry.” On this track, Bada$$ spits over a sample from composer Adrian Younge, another of hip-hop’s notable genre-benders. Listen below, and pre-order the album here.